Vintage is to Hindi cinema, as LBD is to a fashionista. That seems to be the current fad. Hand-painted and super -bright, the second poster of Rowdy Rathore sticks to the theme and is all the better for it. It is eye-catching and don't miss the timely 'Naya Saal Naya Maal' tagline.

The brains behind poster art in the industry seem to have gone for the overall impact rather than focus on specifics. The lead pair poses in a stance that graces umpteen Hindi film posters. Even, thriller Don 2 had one of these. 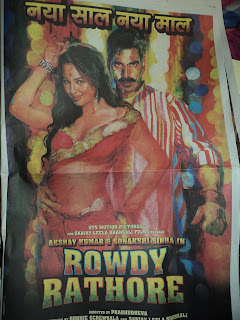 This minor cliche aside, the funky colours make sure that the reader gives it a second dekko. The shades used to highlight the macho in Akshay's character and the blush in Sonakshi's character give it the depth that the rest of the creative doesn't allow.
The vintage theme that began with the first creative looks likely to continue. It will be interesting to see the variations and of course, the taglines.
What would you like to see next ? And what do you think of the vintage look ? Do drop me a line.
Rowdy Rathore directed by Prabhudeva and co-produced by UTV Motion Pictures & SLB Films, is slated to hit the theatres on June 15, 2012
Posted by Tixa M. at 01:30